Stocks Reached New Highs; Where Might They Go From Here?

30 Apr Stocks Reached New Highs; Where Might They Go From Here?

Stocks reached new highs last week. The S&P 500 Index completed a V-shaped recovery last week to register its first record high since September 20, 2018, to close at 2,933.68 on April 23 [Figure 1]. Here we share our thoughts on what this record could mean for stocks going forward.

Our initial reaction to the new high last week was to celebrate the crowning of this bull market as the longest ever. If the S&P 500 hadn’t made a new high before its next bear market decline (20% or more), this bull would have ended short of the 10-year mark. So let’s first celebrate this impressive bull market.

Next, we ask where stocks might go from here. To help answer that question, we calculated the average forward returns for the subsequent 3, 6, and 12 months starting from all record highs in the S&P 500 back to 1950. Stocks have generally done well after reaching new highs, particularly when the time between the new and prior high was more than six months. 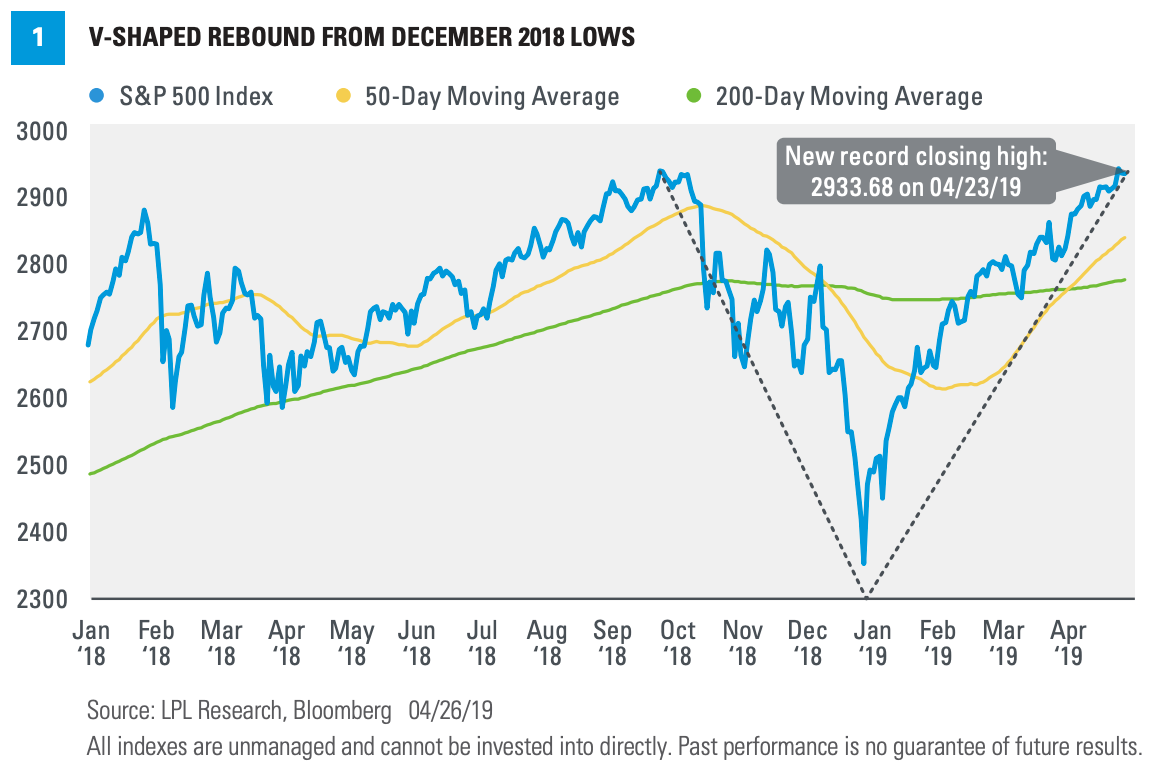 After setting new highs, the S&P 500 has produced above-average returns over the next 12 months, regardless of when the prior highs were reached. But over the next three and six months after new highs, when the highs were not differentiated by their paths to get there, stocks have pulled back slightly on average [Figure 2]. 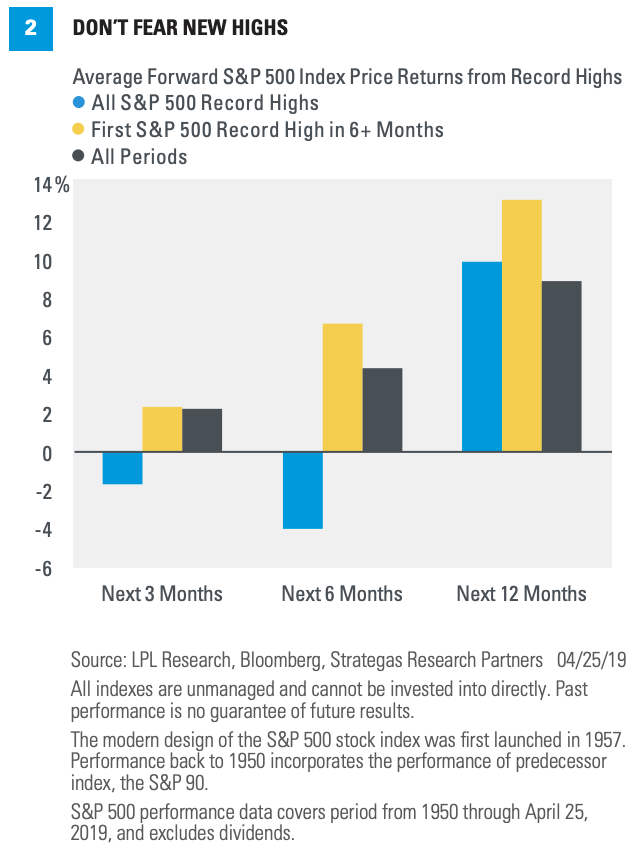 ARE STOCKS TOO FAR OVER THEIR SKIS?

Some investors are no doubt thinking stocks have come too far too fast.  We empathize with those who say stocks have had such a great 10-year run and feel it’s time to take some profits, but we don’t buy the argument that stocks are expensive because they are up a lot. Based on expected earnings over the next 12 months, the forward price-to-earnings ratio (PE) for the S&P 500 is below 17, very reasonable considering low interest rates and inflation. In fact, the Index traded at a forward PE of more than 17 every day of 2017 and spent a fair amount of time near that level in 2015 and 2016. We would also point out that sentiment is not particularly bullish, based on a below-average percentage of bulls in the mid-30s, according to the American Association of Individual Investors sentiment poll, and other sentiment measures we track.

History tells us that new highs should be celebrated, not feared. Even though the market may be “due for a bit of a pullback”, the data tells us to that the odds of the market being higher this time next year is quite high.  In the table below, we have shown just how well the market has done after it hit a record high after 6 months of not having one.  As you can see, the frequency and average returns after the new record high were quite strong, with about 95% of the time producing positive returns and averaged 12.9%.  This is by no means a forecast or assumed return from here. 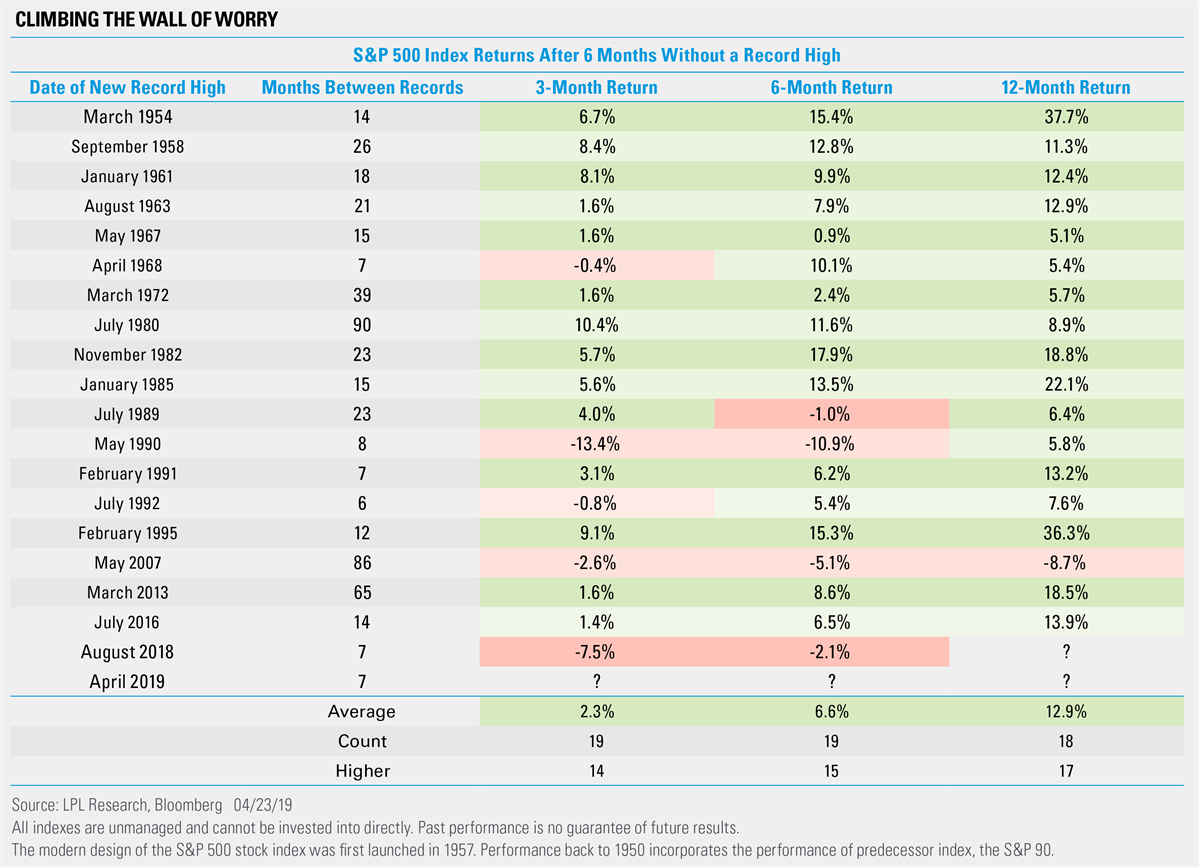 As we always do, we wanted to bring some data to the conversation and give some insight into what history tells us of the market during times like this. If you would like to learn more about our process, advice, and team, please reach out. We would love to connect.