The yield curve—more specifically, shape of the yield curve—is back in the market headlines.[1] Specifically, the widely followed spread between the 10-year Treasury U.S. Treasury yield minus the 2-year yield has sharply narrowed over the last few days on renewed anxieties surrounding trade and the pace of economic growth. The chart below shows that this spread (represented by the blue line) fell to 11 basis points (0.11%) as of December 5. Many analysts and market commentators have been quick to warn that if this spread falls below zero—that is, the yield curve “inverts”—that should be taken as a clear signal that the U.S. economy is heading for a recession. 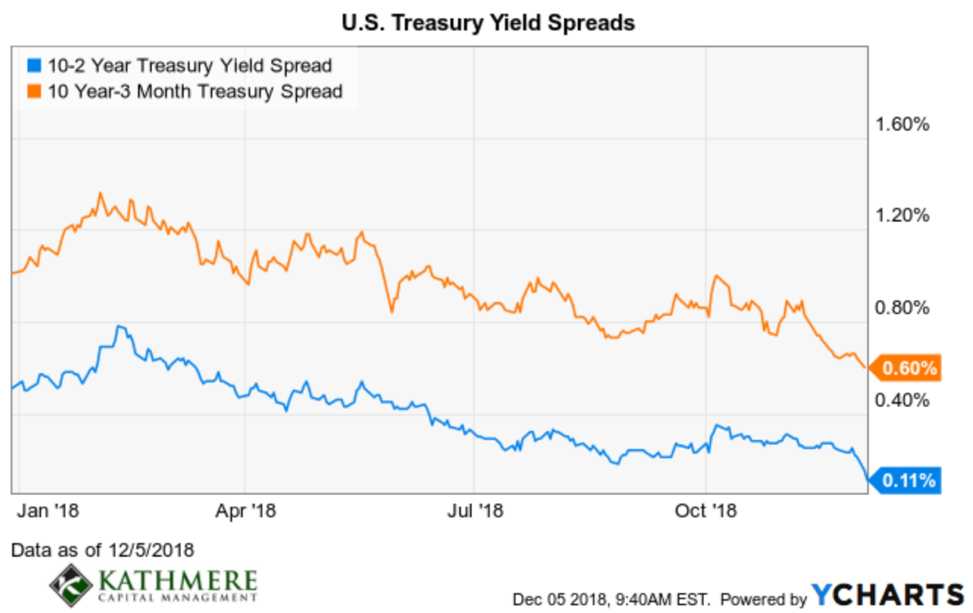 I believe that this risk should be not dismissed outright given that the yield curve has historically be been a reliable predictor of economic recessions. Research from Vanguard as well as others has demonstrated that since 1970 all seven economic recessions in the U.S. were preceded by an inverted yield curve.[2] Vanguard’s highlighted, however, that while a yield curve inversion has historically preceded a recession, its usefulness as a timing tool is far more limited. To wit, Vanguard showed that the time between an inverted yield curve and the eventual onset of the subsequent recession has ranged between 5 and 17 months and averaged more than 10 months, as shown in the table below. 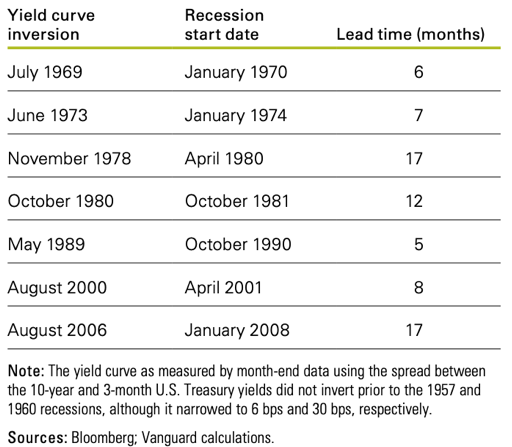 It’s worth pointing out, however, that many analysts and economists tend to view the spread between the 10-year yield and the 3-month yield as a more reliable recession forecasting signal. In fact, the Vanguard research highlighted above was based on this particular measure of the slope of the yield curve. As of December 5, this spread was moderately higher at a still noticeably positive level of around 60 basis points as shown in the chart at the top of this commentary.

James Picerno who runs the insightful economics blog, The Capital Spectator adeptly summarized the current situation as it relates to the shape of the yield curve and this risk of recessions.[3] According to James:

In any case, both spreads [the 10-year minus 2-year spread and the 10-year minus 3-month spread] are still positive and so it’s premature to assume that a new recession is fate. Even if one or both of these spreads goes negative there’s still room for debate about the implications for the business cycle. Although inverted yield curves have been reliable predictors of recessions in decades past, there’s a school of thought that argues that it may be different this time. The reasoning is that the Federal Reserve’s extraordinary monetary policy over the past decade have distorted interest rates and so the historical record for this indicator may be less reliable these days.

Perhaps, but no one really knows the degree of relevancy (or irrelevancy) for the yield curve as a recession predictor. Surely it deserves a spot on the short list of business-cycle indicators, but relying on it in isolation could be problematic in the pursuit of a dependable and timely evaluation of recession risk.

Picerno further elaborates on his perspective on the state of the economic expansion and the overall health of the economy:

…it’s becoming increasingly clear that US growth peaked earlier this year and the economy remains on track to slow in the foreseeable future…But at this stage it’s not obvious that softer growth will soon deteriorate to the point that a new recession is fate.

Indeed, history reminds that the US economy’s speed can vary significantly in an expansionary period without slipping into contraction. Recall that many analysts were fooled in 2011 and 2012 (and again in late-2015 and early 2016) into believing that a new recession was destiny – forecasts that turned out to be wrong, largely due to flawed models and a misguided focus on a handful of indicators.

[1] As a reminder, the yield curve represents a graphical depiction of the interest rates on U.S. Treasury securities of various maturities. If plotted traditionally on a graph, the curve should show a gentle upward slope as longer-term bonds have generally offered higher yields than shorter-term ones.

[3] The Capital Spectator, “Treasury Market Flashing A Warning For US Economy”

Past performance is no guarantee of future results. The opinions voiced in this material are for general information only and are not intended to provide or be construed as providing specific investment advice or recommendations for any individual security. To determine which investment(s) may be appropriate for you, consult your financial advisor prior to investing. All investing involves risk including loss of principal. Bond yields are subject to change. Certain call or special redemption features may exist which could impact yield. The economic forecasts set forth in this material may not develop as predicted and there can be no guarantee that strategies promoted will be successful.