Why International Stocks Are Trailing This Year

08 Oct Why International Stocks Are Trailing This Year

In recent communications we’ve covered the relative weakness in international stocks thus far in 2018. According to data from Ycharts, through September 30, the MSCI All-Country World ex USA Index, a popular barometer of international stock returns covering both developed as well as emerging markets, was down nearly 3% year to date. Meantime, U.S. stocks were up more than 10%, as measured by the S&P 500 Index. Such divergent performance naturally leads to the question: what’s going on? Why are international stocks lagging so badly?

The below chart from JPMorgan sheds some light on this question by breaking down stock market returns for the major regions around the globe in 2017 and for the first nine months of 2018 into four main building blocks: yield (represented here as dividend yield), growth (estimated earnings growth over the next year), multiples (the price paid for a dollar of earnings) and currency effect (the appreciation or depreciation of foreign currencies relative to the U.S. dollar). The results are presented below in Exhibit 1. 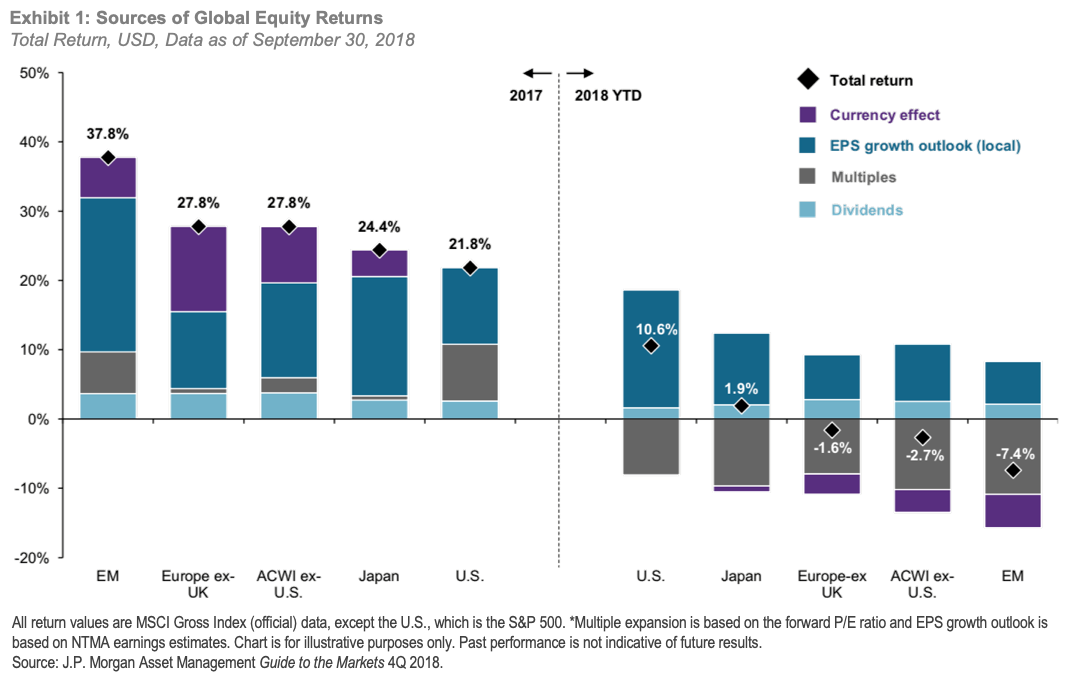 The left side of the chart shows that in 2017 all four components contributed positively to returns in all of the regions—dividends provided their usual yield contribution, earnings grew strongly amid the continued economic expansion, multiples expanded as investors were willing to pay more for a dollar of earnings and foreign currencies strengthened vs. the U.S. dollar. Ultimately, this all added up to strong positive returns across the board with foreign stocks outperforming U.S. stocks with emerging markets stocks leading the way.

The experience thus far in 2018 has been very different as foreign stocks have lagged the U.S. market. On the right side of the chart, we can see first that fundamentals have remained strong—dividends are still being paid and earnings growth has remained healthy. However, valuation multiples contracted measurably reflecting deteriorating sentiment particularly outside of the U.S. which dragged down performance. In addition, foreign currencies depreciated relative to the U.S. dollar which further weighed on results. Taken together, performance has been significantly weaker in 2018 than it was in 2017 on both an absolute and relative (to the U.S.) basis.

Exhibit 2 presented below provides one possible answer as to why sentiment about international stocks has shifted from positive to negative in 2018 which has resulted in contracting multiples. The chart plots the Citi Economic Surprise indices for the U.S., the Eurozone, Japan and emerging markets. These indices measure whether new economic data releases are coming in better or worse relative to consensus expectations. A positive reading means that the recent data releases have been better than expected while a negative reading indicates that recent releases have been worse than expected. 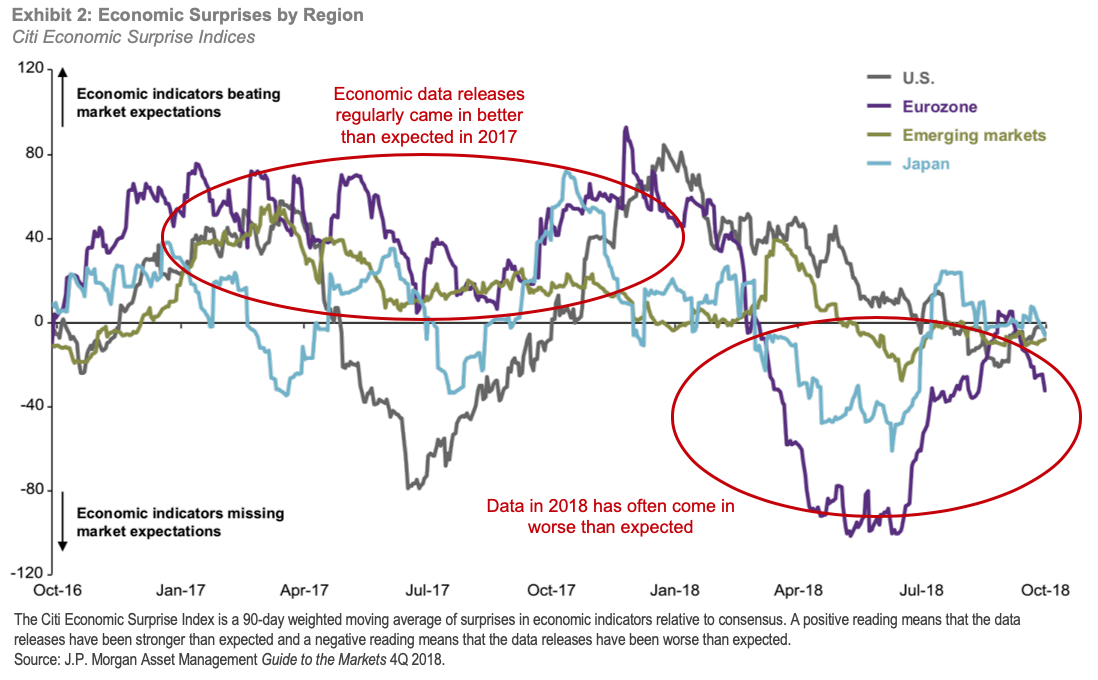 The chart shows that for the better part of 2017 the economic data outside of the U.S. regularly surprised to the upside. That is, releases typically revealed better-than-expected performance. In 2018, however, the story has been different. We can clearly see that during the first half of the year, the data routinely surprise on the downside—significantly in the Eurozone and Japan and to a lesser extent in emerging markets. It’s quite common to see equity market valuations contract in such an environment where economic data is coming in worse than expected.

It’s worth pointing out, however, that while recent economic data releases have certainly been worse than expected, the global economy remains on solid, expansionary footing. Exhibit 3 presents a heatmap of global Purchasing Managers Indices (PMIs) for manufacturing which are commonly used as a proxy for economic activity. The heatmap colors are relative to a reading of 50, above which represents an acceleration in activity (colored in green shades) while a reading below 50 represents a deceleration in activity (colored in red shades) for the time period shown. The chart displayed below demonstrates that economic activity remains expansionary in nearly all of the major economies around the globe. 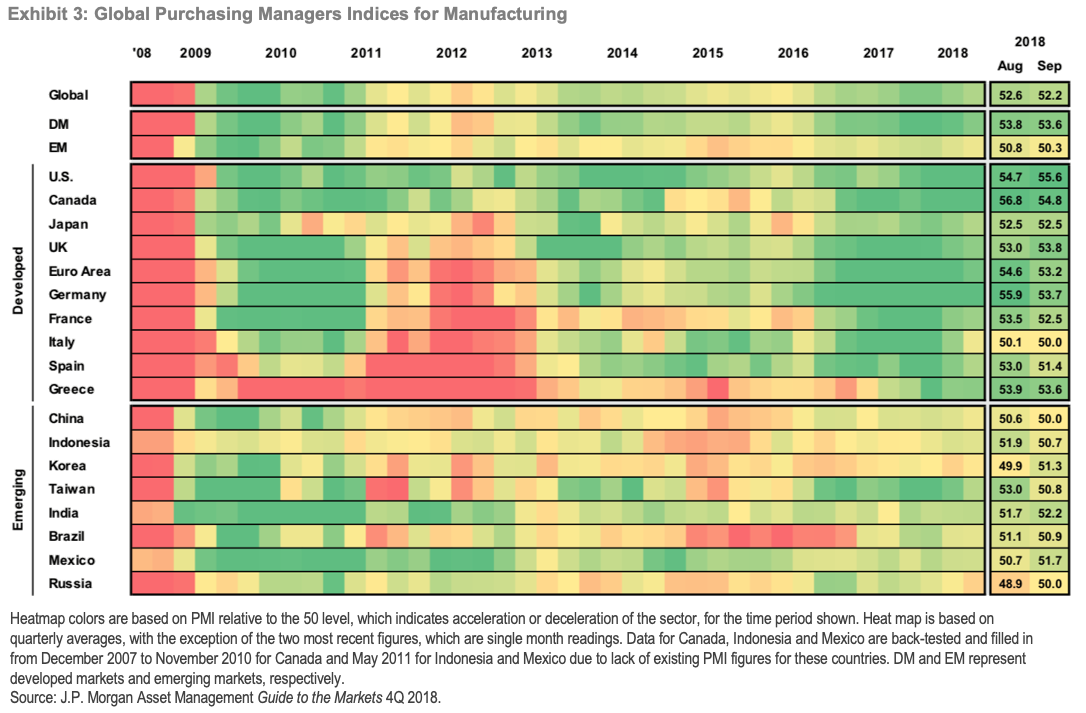 We’ll conclude with one additional chart that demonstrates the variability in currency movements and how at various times they’ve contributed positively or negatively to returns. Exhibit 4 which is presented nearby plots the annual total return on the MSCI ACWI ex. USA Index each year and breaks it into two components: the return on the index in local currency terms and the contribution to a U.S. based-investor’s return from the appreciation or depreciation of foreign currencies in aggregate relative to the U.S. dollar. A cursory review of the chart reveals that over the last nearly 15 years, there has been substantial variability in the contribution to a U.S.-based investor’s return of the currency component of foreign investing. As you can see, there have been years where foreign currencies appreciated relative to the U.S. dollar and contributed positively to returns, sometimes significantly (e.g., 2003, 2009 and 2017). Meantime, there have also been years where foreign currencies depreciated against the U.S. dollar and detracted from returns (e.g., 2005, 2014-2015, 2018 year to date). 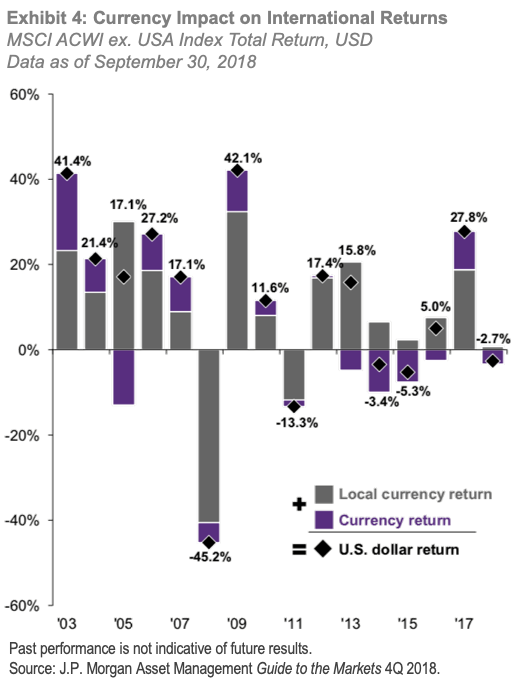 Please reach out to us with any questions you have or if you’d like to talk about your personal situation and investments,

Past performance is no guarantee of future results. Indices are not available for direct investment. Their performance does not reflect the expenses associated with the management of an actual portfolio. All performance referenced is historical and is no guarantee of future results. No strategy assures success or protects against loss. The opinions voiced in this material are for general information only and are not intended to provide or be construed as providing specific investment advice or recommendations for any individual security. To determine which investment(s) may be appropriate for you, consult your financial advisor prior to investing. The economic forecasts set forth in this material may not develop as predicted and there can be no guarantee that strategies promoted will be successful. All investing involves risk including loss of principal. Investing in stock includes numerous specific risks including: the fluctuation of dividend, loss of principal, and potential liquidity of the investment in a falling market. Investing in foreign and emerging markets securities involves special additional risks. These risks include, but are not limited to, currency risk, geopolitical risk, and risk associated with varying accounting standards. Investing in emerging markets may accentuate these risks.

Standard & Poor’s 500 Index is a capitalization-weighted index of 500 stocks designed to measure performance of the broad domestic economy through changes in the aggregate market value of 500 stocks representing all major industries. MSCI ACWI ex USA Index captures large and mid cap representation across 22 of 23 Developed Markets (DM) countries (excluding the US) and 23 Emerging Markets (EM) countries. With 1,854 constituents, the index covers approximately 85% of the global equity opportunity set outside the US.