Interest rates across the U.S. Treasury yield curve have generally trended upwards over the last year and a half since touching cyclical lows during the summer of 2016. A cursory glance at the chart presented nearby, which depicts the yields of U.S. Treasury notes and bonds of various maturities over the last two years, reveals that yields on bonds of all tenors have moved higher in recent months and that the increases have been most pronounced in shorter-term yields such as the two- and the five-year yield.

We believe these moves have altered the dynamics within the investment-grade fixed income markets such that for certain taxable fixed income investors, high-quality, short-duration bonds may offer a compelling mix of prospective return and risk relative to other segments of the bond markets. Three primary factors drive our view:

For much of the past five years, yields on high-quality, short-maturity bonds generally ran at levels below that of inflation meaning that investors in these types of bonds earned returns that failed to preserve (let alone grow) the spending power of their capital. As the chart below demonstrates, this dynamic has changed in recent months as a result of the general increase in rates. Yields on short maturity U.S. Treasury and corporate bonds are now comfortably above the rate of inflation for the first time in years, meaning that absent any further changes in interest rates, investors in short-term bonds can expect to grow their assets in real (i.e., inflation-adjusted) terms. 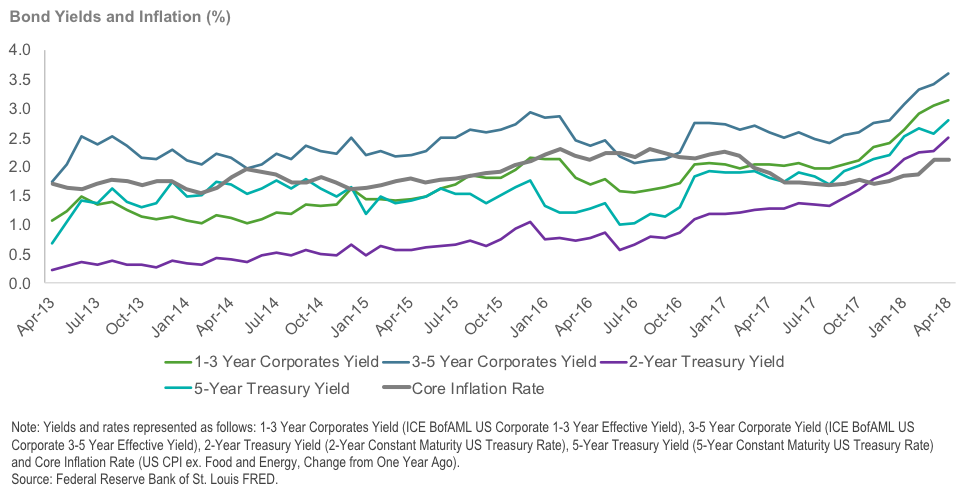 While a bond’s yield is certainly a critical driver of its returns, it’s not the only factor. In addition to the yield, a bond investor’s return is also affected by the change in yields during the investor’s holding period. As we know, bond prices move inversely to changes in yields—when bond yields increase, bond prices decline and vice versa. In addition, as a matter of bond math, the prices of short-term bonds are less sensitive to changes in yields than are the prices of intermediate- and long-term bonds.

Due to the general increases in yields across the yield curve and the fact that short-term bond prices are less sensitive to future changes in yields (i.e., for the same sized increase in yields, the price of short-term bonds will decline by less than those of long-term bonds), short-term bonds now offer a relatively attractive cushion against further rate increases as compared to intermediate- or long-term bonds. One way to look at this is through a relatively simple breakeven analysis which effectively asks: how much would yields need to rise to completely wipe out a year’s worth of income (i.e., yield) on a bond? The chart below from BlackRock plots the breakeven cushions on short-, intermediate- and long-maturity U.S. Treasury bonds over the last few years. 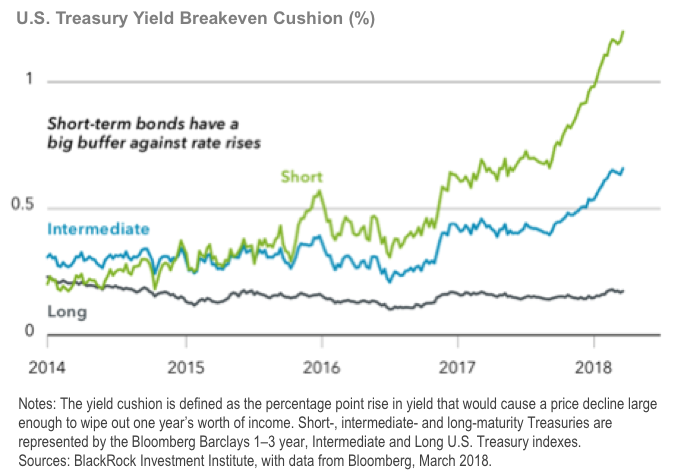 The graph clearly reveals that short-term bonds offer a much more substantial cushion against future rate increases than do intermediate- or long-term U.S. Treasury bonds. According to BlackRock’s data, as of the end of March, Treasury yields would need to increase by more than a full percentage point to completely offset one year’s worth of yield on short-term Treasuries. In contrast, it would only take a rise of a little more than a half of a percent to erase the current yield on intermediate bonds and just a quarter point increase to do the same on long-term Treasuries.

3.  Research has demonstrated that taking on additional maturity or term risk as not been well rewarded when the difference between short- and intermediate-term yields has been at levels comparable to today’s.

Decades of rigorous research has demonstrated that longer-maturity bonds have historically delivered higher average returns and higher average volatility than shorter-term securities over long periods of time. This empirical relationship has been labeled in the investment community as the term premium in fixed income securities.

Research as further demonstrated that there is a reliable relationship between current term spreads (i.e., the difference in starting yields between short- and longer-maturity bonds) and future term premium differences (i.e., the difference in subsequent realized returns between short- and longer-term bonds). The chart below from Dimensional Fund Advisors compares the performances of intermediate-term U.S. government bonds to short-term bonds in months where the yield spread between the two at the beginning of the month was either greater than or less than average. As the chart demonstrates, in months beginning with wider-than-average spreads, the subsequent realized term premium has been considerably stronger than in months beginning with narrower-than-average spreads. Put differently, fixed income investors have not historically been well rewarded for taking on additional maturity or term risk when the initial yield difference between short- and longer-term securities has been smaller than average. 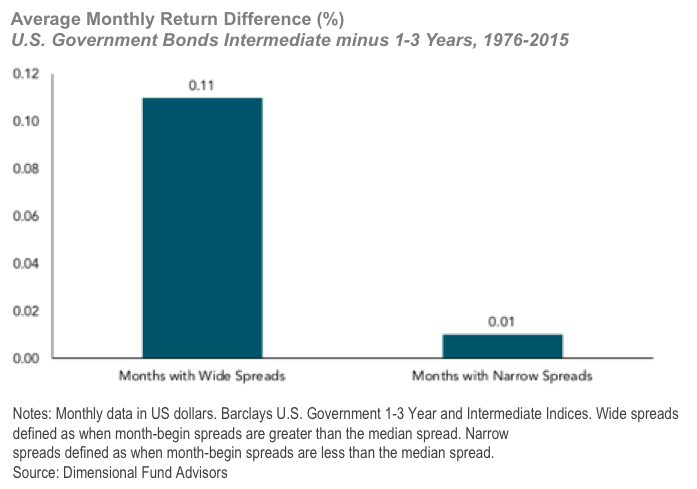 Separate data from the Federal Reserve Bank of St. Louis shows that according to one common measure of term spreads, called the 2/10 Treasury Spread—which compares the difference in yield between the 10-Year U.S. Treasury note and the 2-Year note—term spreads are currently narrow relative to history. As of the end of April, the 2/10 spread stood at 0.46% which was less than half of the average level since June 1976 (0.96%) based on monthly observations. As such, we believe investors should not expect to be generously rewarded in the months ahead for bearing additional term risk given today’s starting term spreads.

Please reach out to us with any questions you have or if you’d like to talk about your personal situation and investments,

Past performance is no guarantee of future results. Indices are not available for direct investment. Their performance does not reflect the expenses associated with the management of an actual portfolio. All performance referenced is historical and is no guarantee of future results. No strategy assures success or protects against loss. The opinions voiced in this material are for general information only and are not intended to provide or be construed as providing specific investment advice or recommendations for any individual security. To determine which investment(s) may be appropriate for you, consult your financial advisor prior to investing. The economic forecasts set forth in this material may not develop as predicted and there can be no guarantee that strategies promoted will be successful.Bonds are subject to market and interest rate risk if sold prior to maturity. Bond and bond mutual fund values and yields will decline as interest rates rise and bonds are subject to availability and change in price. Government bonds and Treasury bills are guaranteed by the U.S. government as to the timely payment of principal and interest and, if held to maturity, offer a fixed rate of return and fixed principal value. However, the value of fund shares is not guaranteed and will fluctuate. Securities offered through LPL Financial, Member FINRA/SIPC. Investment advice offered through Private Advisor Group, a Registered Investment Advisor. Private Advisor Group and Kathmere Capital Management are separate entities from LPL Financial.