As we covered in recent our 2017 Market Review commentary global socks delivered historically strong returns with U.S. stocks finishing the year up more than 21% and non-U.S. markets faring even better ending the year up nearly 28%, as measured by the Russell 3000 Index and the MSCI All Country World ex USA Index, respectively.

We believe it’s always beneficial to consider asset class performance within the context of its long-term history. We think such an exercise can be beneficial in helping us to establish reasonable expectations for future performance.

To wit, we believe that recognizing and appreciating whether a given year’s (or stretch of years’) performance can most appropriately be characterized as abnormally good or abnormally poor or somewhere in between approximating what could be described as “normal” can serve as an effective ballast to steady our expectations for the future by helping us to avoid falling victim to the pervasive human tendency to extrapolate recent performance trends too far into the future. History has taught us that over-extrapolation of performance trends can be especially risky in an investing context as mean reversion (i.e., the reversal of recent trends toward their long-term averages) has proven itself to be a powerful force through time.

Below, we’ll take a deeper look at the performance of U.S. stocks in 2017 across two dimensions: returns and volatility (or “risk”).

In Figure 1, we plot the annualized performance of U.S. stocks, as measured by the S&P 500 Index, over the last one, three, five and 10 years as well as since January 1926. What immediately stands out is that the S&P 500’s nearly 22% return in 2017 was more than 2x that of its long-term annual average dating back to 1926. In addition, as a result of yet another year of relatively strong performance, the average annualized performance over the last three and five years is noticeably above the long-term average as well (the 10-year figure remains slightly below average as it still includes the poor performance realized during the depths of the financial crisis in 2008-2009). 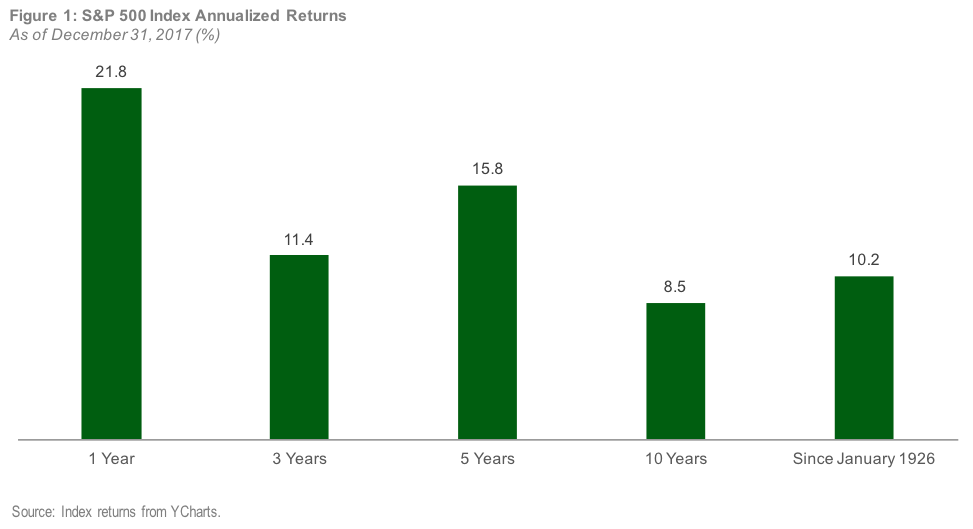 In response to questions about the causes of the stock market crash of 1987, Ace Greenberg, the CEO of Bear Sterns replied “Stocks fluctuate. Next question.” As displayed in Figure 2, his answer, while slightly flippant, was factually spot on. Since the beginning of 1980, the S&P 500 Index has on average experienced 62 daily moves in either direction (i.e. up or down) of greater than 1% each year, with five of those moves being days where the market either gained or lost more than 3%.

The stock market’s 2017 performance, meantime, stands in stark contrast to the historical record. A cursory glance at Figure 3 reveals that the market’s 2017 performance was historically unusual in terms of the near complete lack of volatility. During the year, the S&P 500 Index experienced just eight daily moves of more than 1% in either direction and none greater than 2%. Of those eight, just three were daily losses. The last time we experienced such a period of relative tranquility in the market was approximately a quarter century ago in the early 1990s. 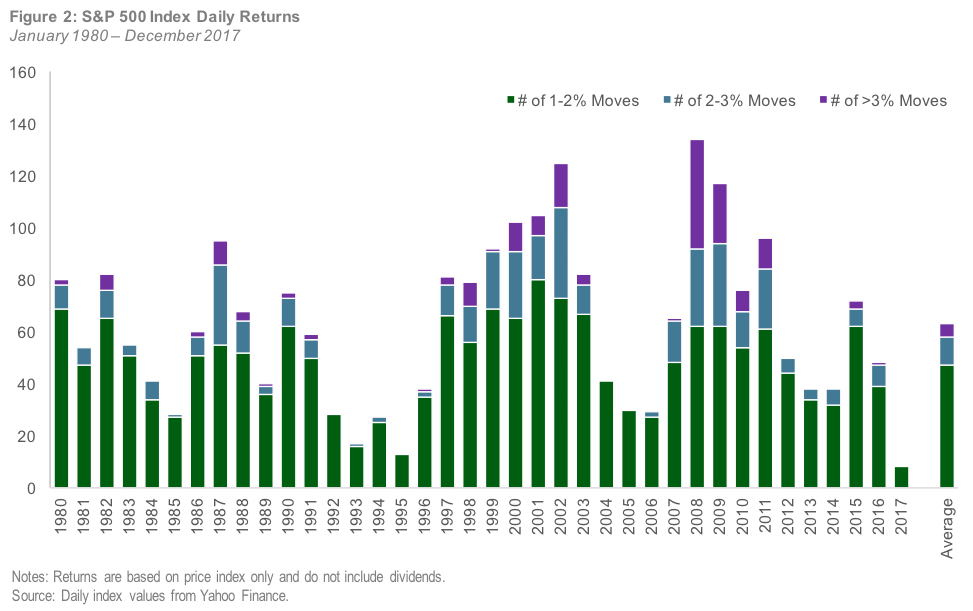 In addition to the overall strength of U.S. stocks in 2017 and the lack to volatility in daily moves either up or down, last year’s performance was historically unusual for one additional reason: the market barely experienced a drawdown of any significance. Figure 3 demonstrates that stock market drawdowns or “corrections” have historically been a quite common experience, even in upward-trending markets or otherwise positive years. In fact, dating back to the beginning of 1980, the market has, on average, experienced a drawdown (i.e., peak-to-trough move) of nearly 14%, despite finishing the year in positive territory in 29 of the 38 years covered in the chart. In sharp contrast, we can see that the maximum drawdown we experienced in 2017 was only 2.8%! Just one time in the last nearly 40 years have we experienced a smaller maximum drawdown (-2.5% in 1995). 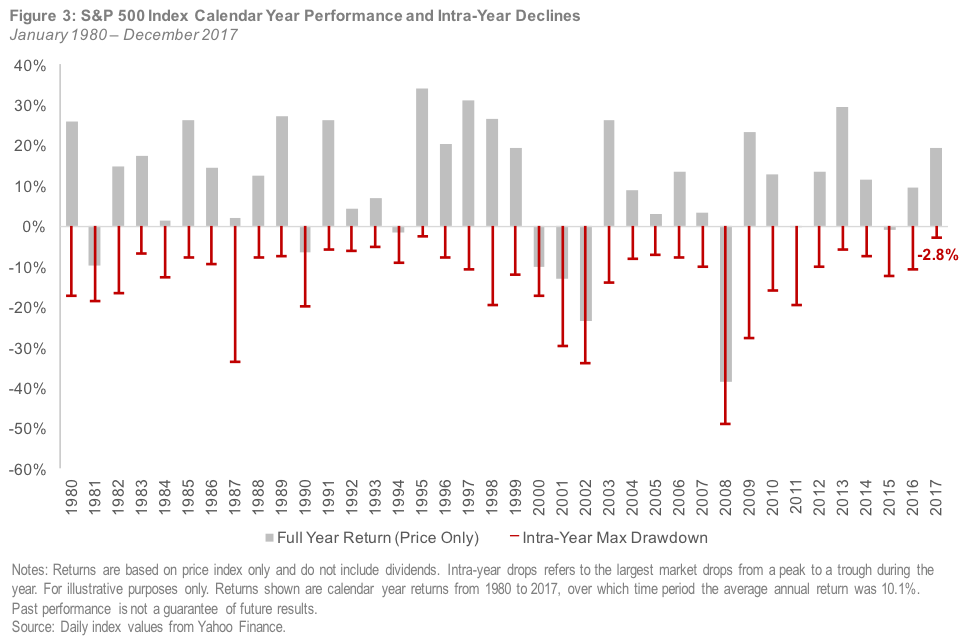 Simply put, the performance of U.S. stocks in 2017 is far more appropriately characterized as “abnormal” than it is “normal.” Very rarely have stocks delivered historically high returns and historically low volatility/risk at the same time. We implore all investors not to get too comfortable or complacent in environments such as this. Time and again, we’ve seen mean reversion occur where unusually strong returns are followed by unusually weak ones (and vice versa) and unusually low volatility followed by unusually high volatility (and vice versa).

To be very clear, however, we are not calling for a correction nor a spike in volatility to occur imminently. We can’t tell you when the next correction will occur, how significant it will be, nor how long it will last. No one can—it can’t be done consistently. We can tell you, however, that at some point a correction will occur and volatility will return to the stock market. We believe all investors would be well served to keep this in mind and to ensure that their portfolio is well diversified and properly calibrated to their risk tolerance as dictated by their unique personal financial situation.

Thank you for your time and we hope you found this both informative and interesting. Please reach out to us with any questions or comments, we’d love to talk,

Russell 3000 Index measures the performance of the 3,000 largest U.S. companies based on total market capitalization, which represents approximately 98% of the investable U.S. equity market.

MSCI All Country World ex USA Index captures large and mid cap representation across 22 of 23 Developed Markets (DM) countries (excluding the US) and 23 Emerging Markets (EM) countries. With 1,854 constituents, the index covers approximately 85% of the global equity opportunity set outside the US.