Humor us for a few moments and entertain this admittedly odd hypothetical scenario. Take yourself back to New Year’s Eve of last year as you were getting ready to say goodbye to 2015 and to ring in 2016. Imagine that you were at a party and an unusual vehicle, driven by an even more unusual young gentleman named Marty McFly (both pictured in Figure 2), pulled up the party.

What made Marty so particularly unusual is that he spent most of the evening making the rounds at the party telling anyone, yourself included, that he had just come back from the future and that he knew with certainty a few of the major headlines that would occur over the course of the next 12 months. Among the noteworthy headlines he described were:

Imagine, implausible as it sounds, that you took your new friend Marty for his word that he had in fact traveled back from the future and you believed the events he described to you would in reality occur just as Marty told you they would. Now, imagine you were given the choice to sell all of your stocks, and “just wait things out” until the environment feels a bit more conducive to investing in stocks. Do you think you would have sold and moved to cash or held pat?

Candidly, we think we may have sold.

All of the events listed above happened, just as Marty told us they would. And, as Exhibit 1 at the top demonstrates. US stocks finished the year up 12.7%. As you can also see, other capital assets posted modest, yet still positive returns as well. Specifically, foreign stocks and US taxable bonds returned 4.5% and 2.7%, respectively.

Perhaps even more surprising than the overall strong positive performance of US stocks in 2016 was the manner in which this performance was achieved. Given all of these relatively significant and ostensibly market-moving headlines, it’s natural to assume that markets would have been spectacularly volatile. However, in reality, US stock market volatility in 2016 was “amazingly normal” according to a recent market commentary by Cliff Asness, the Chief Investment Officer and co-founder of asset manager AQR.[ii] Asness evaluated three different measures of the volatility of the S&P 500 Index (annualized daily volatility, the largest one-month change in the index on a rolling basis, and the full range between the low and high of the index over the course of the year) dating back to 1946 and found that according to the three measures, 2016 landed between the 49th to the 54th percentile historically dating back to WWII. Put differently, over the last 80 years of S&P 500 history, the market had been more volatile 46% to 51% of the time.

We believe the past year serves as an excellent reminder of three critical points:

Points two and three above point directly to the value professional advice can play in helping you to work toward your personal investment goals. An effective financial advisor can to work understand your unique financial situation, goals and risk tolerance and can craft an investment strategy tailored to your situation and your goals. Beyond the construction of a cost-effective, evidence-based diversified portfolio, an advisor can critically act as an effective behavioral coach helping you to maintain a long-term perspective and disciplined adherence to your investment plan in the face of the emotions that are so naturally elicited by the markets from time to time.

Rather than attempt to predict what 2017 will bring, which we believe to be a relatively futile exercise, we’ll instead present a list of a few things we’ll be watching over the next year and beyond:

Can value stocks continue their recent stretch of outperformance?

The value premium (the historical tendency of value stocks to outperform growth stocks) is one of the most well-known and well-documented premiums in financial markets research and plays a significant role in our approach to portfolio construction. For much of the last decade, however, value stocks have generally lagged growth stocks. In fact, the 10-year period ending in 2015 ranked among one of the worst 10-year periods in history as value stocks lagged their growth counterparts by roughly three percentage points per year during the period, as demonstrated in Exhibit 3. 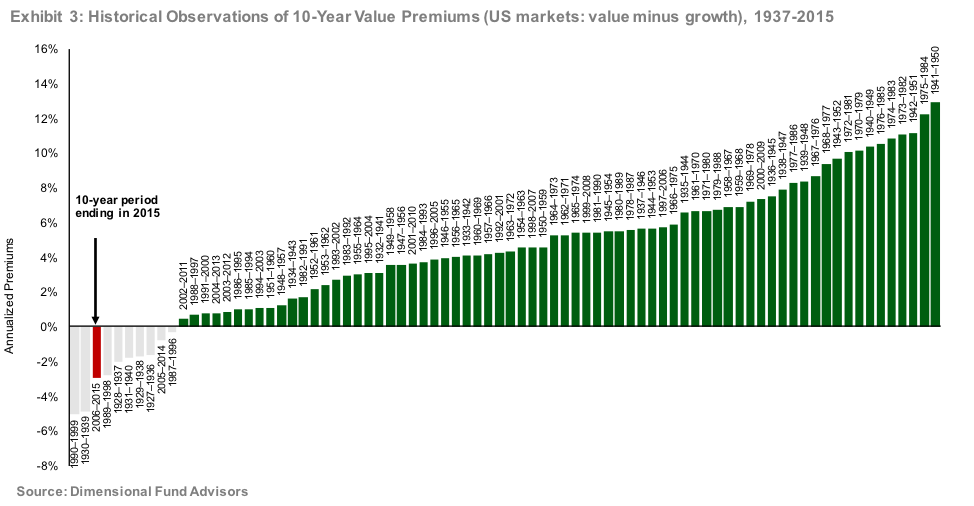 This past year brought about a reversal of the recent trend as value stocks handily outperformed growth stocks by more than 10 percentage points (the Russell 1000 Value Index returned 17.3% for the year while the Russell 1000 Growth Index returned 7.1%). Will we ultimately look back at 2016 as the start of an extended stretch of outperformance for value?

Will we finally see foreign stocks outperform US stocks?

We wrote at length in our November commentary about the recent underperformance of international stocks relative to US stocks and what it meant for long-term investors with diversified portfolios. The past year ended as another disappointing one for global investors as foreign stocks from both developed as well as emerging markets trailed US markets, which can be seen in Exhibit 1. This marks the fourth consecutive year in which both developed (MSCI EAFE Index) and emerging market (MSCI Emerging Market Index) stocks trailed the S&P 500 Index. Notably, over the last five years, as of the end of 2016, the S&P 500 Index returned 14.7% annually, significantly outperforming both the MSCI EAFE Index (+6.5%) and the MSCI Emerging Markets Index (+1.3%). Both developed and emerging markets posted positive years in 2016 with emerging markets coming close to matching the performance of US stocks. Will 2017 finally be the year in which foreign stocks outpace US stocks, something last seen in 2013?

Are we headed for higher interest rates for real this time?

In last month’s commentary, we discussed the relatively marked ascent of US interest rates from their all-time lows achieved in July. Specifically, the 10-year US Treasury yield increased a full percentage point from 1.37% in mid-July to end November at 2.37%. Rates inched up ever so slightly more in December to end the year at 2.45%, up modestly from where they ended the year in 2015 (2.27%) but still well below where they stood at the end of 2009 (3.89%). The consensus opinion of the pundits and talking heads in the press and on the airwaves all appear to be in agreement on where rates will go from here: up. They very well may. However, its nevertheless remarkable to note how significantly opinion has shifted in a relatively short order from earlier this summer when, with rates at an all-time low the consensus was that ultra-low rates were here to stay. Will rates continue their upward march in 2017?

Will the animal spirits seemingly aroused by Trump’s election remain ignited or will they go back into hibernation?

Following Donald Trump’s surprise election in November, one thing that’s really stuck us about the environment has been the return of optimism regarding the markets and the economy more broadly. Specifically, since the election, we’ve seen a noted increase in two prominent measures of consumer and investor sentiment. First, in December the University of Michigan Index of Consumer Sentiment registered its highest reading since January 2004. Meanwhile, in the AAII’s Investor Sentiment Survey the share of respondents indicating that they were bullish on the prospects for the stock market increased by more than 20 percentage points from immediately prior to the election to the latest survey. Specifically, in the November 3, 2016 survey, just 23.6% respondents indicated bullishness compared to 46.2% in the latest survey taken on January 5, 2017. Will this renewed bout of optimism and bullishness be sustained? Or, as we posited in last month’s commentary, have consumers and investors placed too much emphasis on the potential positives of the incoming Trump administration’s policy platform while too aggressively discounting the possible negatives?

As always, please don’t hesitate to call or send us an email if you’d like to discuss any of this or how it applies to your specific situation.

Thank you for your continued trust,

The economic forecasts set forth in the presentation may not develop as predicted.

The opinions voiced in this material are for general information only and are not intended to provide or be construed as providing specific investment advice or recommendations for any individual security. To determine which investment(s) may be appropriate for you, consult your financial advisor prior to investing. All performance referenced is historical and is no guarantee of future results. All indices are unmanaged and cannot be invested into directly. Unmanaged index returns do not reflect fees, expenses, or sales charges. Index performance is not indicative of the performance of any investment.

Government bonds and Treasury bills are guaranteed by the U.S. government as to the timely payment of principal and interest and, if held to maturity, offer a fixed rate of return and fixed principal value. However, the value of fund shares is not guaranteed and will fluctuate.

The MSCI EAFE Index is a capitalization-weighted stock market index that is designed to measure the equity market performance of developed markets outside of the U.S. & Canada.