In last month’s edition, we wrote about how U.S. stock market volatility took a bit of a summer vacation. Like all vacations, this one too came to an end. While September started our relatively quiet—the S&P 500 Index featured five consecutive days of daily moves less than 0.5% to begin the month—the latter portion of the month saw a return of volatility as the index experienced five daily moves of greater than 1% over the final 16 trading days of the m

Thus, while the U.S. stock market experienced a brief period of subdued volatility over the dog days of summer, the U.S. economy as a whole has been in an extended period of relatively stable, albeit disappointingly slow growth. The chart below plots the volatility of U.S. real (inflation-adjusted) GDP growth over rolling five-year periods. A cursory glance at the chart below reveals that the volatility of growth has been among the lowest ever recorded dating back to WWII. 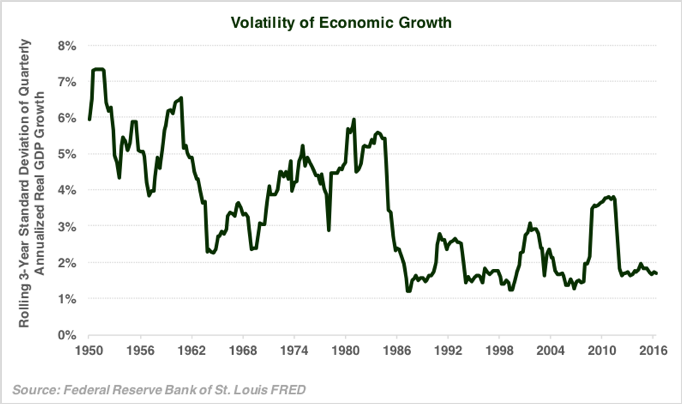 Recent research from PIMCO highlights that it’s not just U.S. growth that’s been relatively stable in recent years. According to PIMCO, “the last four years have been the least volatile for G20 real GDP growth ever recorded dating back to the 1980s.”[1] 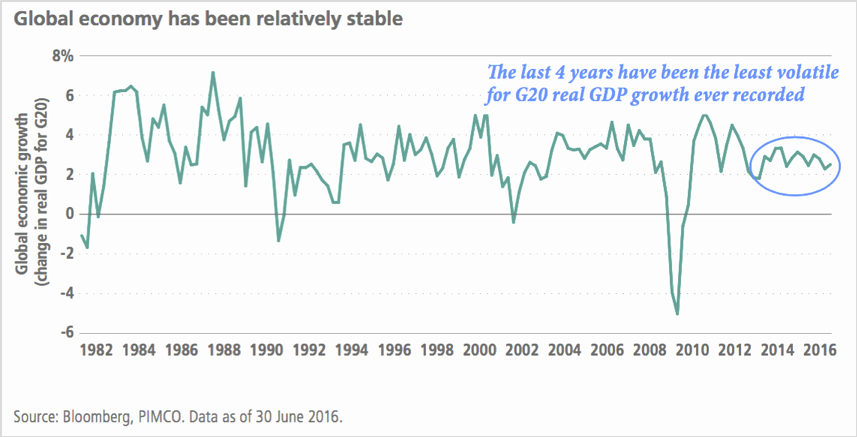 That said, perhaps the most noticeable characteristic about U.S. economic growth in recent years hasn’t necessarily been the lack of volatility of growth but simply the relative lack of growth. As the chart below demonstrates, in terms of average annual growth, the pace of the current expansion in the U.S. has been weaker than any expansion since 1949. The economy has grown at a 2.1% annual rate since the recession was officially declared over in June 2009, well below the rate experienced in a “typical” expansion.[2] The first two quarters of 2016 have been a continuation of the slow growth trend with growth registering at a 0.8% and 1.4% annualized pace in the first and second quarters, respectively. 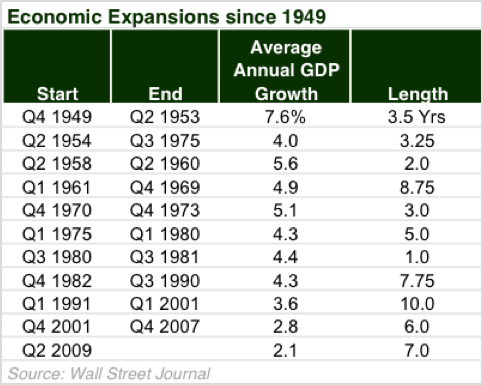 Beyond the current slow growth, many investors and market observers are projecting muted growth in the years ahead. In fact, among members of the Federal Reserve Open Market Committee, the body that sets monetary policy in the U.S., the median forecast for long-run economic growth was 2% according to their latest projections.[3]

In light of this outlook, many investors have expressed concerns lately about the prospect of muted growth—not only in the U.S. but abroad as well—and its implications on future equity market returns. We caution investors from jumping to this seemingly logical conclusions and instead challenge them to rely on the empirical evidence. Research from Vanguard and others has demonstrated that the relationship between economic growth and equity market returns is not as clear cut as our intuition would suggest. In fact, according to Vanguard’s analysis of GDP growth and equity market returns across 46 countries extending back more than 40 years in some cases, they found that “the average cross-country correlation between long-run GDP growth and long-run stock returns has been effectively zero.”[4] In other words, economic growth alone has not been effective at explaining equity market returns as high returns have been realized in low growth countries and vice versa. A separate Vanguard study further confirmed that neither past realized nor expected GDP growth are effective predictors of future equity market returns in the U.S.[5]

Ultimately, rather than attempting to make portfolio allocation decisions on the basis of economic growth expectations, we believe a more prudent and effective approach is to focus on controlling what is in our power as investors to control. Namely, among other things, we believe in focusing on maintaining a broadly diversified asset allocation, keeping investment costs to a minimum, and allocating portfolio assets toward strategies and segments of the markets selling at attractive valuations.

Please reach out to us with any questions you have or if you’d like to speak about your investments,

The opinions voiced in this material are for general information only and are not intended to provide specific advice or recommendations for any individual security. To determine which investment(s) may be appropriate for you, consult your financial advisor prior to investing. All performance referenced is historical and is no guarantee of future results. Indexes are unmanaged and cannot be invested into directly.

Economic forecasts set forth may not develop as predicted.

Investing in stock includes numerous specific risks including: the fluctuation of dividend, loss of principal and potential illiquidity of the investment in a falling market.