Some Thoughts on The Recent Market Volatility

The return of volatility to U.S. stock markets over the past few weeks and the media’s extensive coverage of it has understandably raised some concerns among investors of all stripes. In this commentary, I offer three brief thoughts relating to the current environment that I hope will help will provide long-term investors with some additional historical context against which to consider the market’s recent moves.

Points are not percentages

There are a number of things about the financial media that annoy me. Near the top of the list is certainly the media’s propensity to primarily quantify and discuss the daily gyrations of the stock market in points rather than percentages. For instance, a recent headline read “Dow Plunges 1,175 – Worst Point Decline in History”.1 Such a headline, while great for fear-mongering and driving clicks on the website, is a best incomplete, and at worst highly misleading.

It’s factually true that the Dow Jones Industrial Average’s 1,175 point drop on February 5, 2018 was the single largest daily decline in the history of the Dow. However, the headline conveniently leaves out the fact that the day’s decline in percentage terms (what really matters to investors) was 4.6% which—while not insignificant—was not even among the largest 25 daily declines since February 1985 according the index data from Yahoo Finance. The table below displays Dow’s ten largest daily declines as defined by both point declines and by percentage declines. 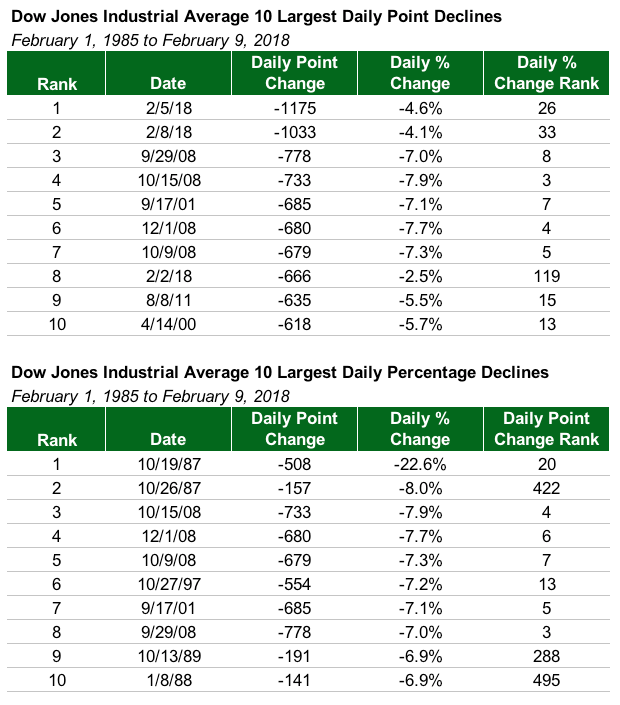 What immediately stands out from these two tables is that all of the ten largest daily declines in point terms have occurred since the turn of the millennium while the largest declines in percentage terms are more spread out through history—generally tending to cluster around a small number of “crisis” environments. The fact that the largest point declines have all occurred within the last two decades is entirely to be expected for the simple reason that the index has been at a far higher absolute level during the 2000s than it was in the 1980s owing to the market’s general tendency to increase over time historically. To wit, the 1,174 point drop on February 5 was nearly equal to the index’s total level at the beginning of our analysis period on February 1, 1985 when the index closed at 1,278!

My point here is not to dismiss a daily decline of more than 4% as an insignificant everyday event (to be sure such drops are rare, but not that rare), but rather to stress that these events ought to be reported on in more nuanced and circumspect manner that frames these moves in terms that are actually meaningful to investors. By this measure we’d recognize that while the market’s declines on both February 5 and a few days later on February 8 (when the Dow lost 1,033 points) were certainly significant drops even in percentage terms, they were also by no reasonable or meaningful measure “the worst day ever” or “unprecedented” as the media would have you believe.

I came across the following sketch the other day from Carl Richards, who is the creator of “The Sketch Guy” column in the New York Times, that I thought perfectly described the market environment over the last 14 or so months. 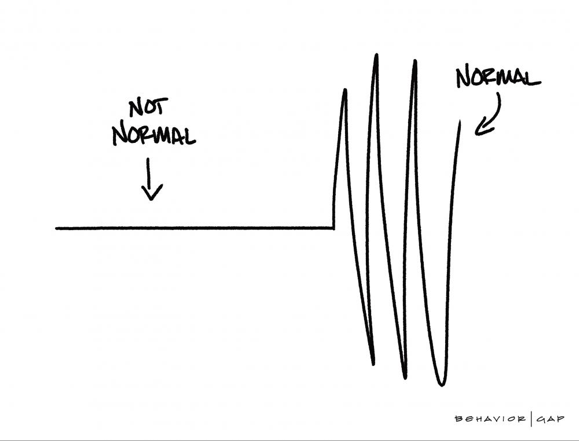 In my opinion, Richard’s sketch cannily encapsulates both: (a) the near complete absence of volatility in markets in 2016 and which was decidedly “not normal” (a point which we covered in a recent commentary) and (b) the experience thus far in 2017 which is far more closely resembles a “normal” market environment. The table below, using data from Yahoo Finance, demonstrates how unusually calm 2017 was in terms of daily S&P 500 Index moves relative to history as well has how volatility has returned to the market in 2018.

I’ll close this commentary by sharing some additional data from Morgan Stanley highlighted in a recent market commentary published by Lord Abbett which addresses how global stocks have historically performed following a daily decline on the S&P 500 Index of a similar magnitude to the ones we’ve recently experienced.2 Their finding: “Historically, when the market experiences a volatility spike against the backdrop of a strong economy—regardless of the catalyst—equities …tend to regain their footing relatively quickly, and typically are stronger three, six, and 12 months down the road.”

The Dow Jones Industrial Average (DJIA) is a price-weighted average of 30 significant stocks traded on the New York Stock Exchange (NYSE) and the NASDAQ.

The MSCI ACWI is a market capitalization weighted index designed to provide a broad measure of equity-market performance throughout the world. The MSCI ACWI is maintained by Morgan Stanley Capital International (MSCI), and is comprised of stocks from both developed and emerging markets.