Is the current market or economic expansion "late in the cycle"?

The economic expansion which officially began in July 2009 is entering into its 10th year. Based on data from the National Bureau of Economic Analysis (NBER), the current expansion is now the second longest expansion on record, trailing only the one that ran from March 1991 to March 2001. Further, since the stock market hit its cyclical bottom in early March 2009, the S&P 500 Index is now up more than 300% on a price-only basis and including the reinvestment of dividends is up nearly 400%.

Against this backdrop, one doesn’t need to spend too much time reading or watching the financial media before coming across someone proclaiming that we are in a “late cycle” macro economic or market environment or both. As a slight aside, it’s worth mentioning that we’ve been hearing market commentators, economists and professional investment strategists state that we’re late cycle or in baseball parlance in the sixth, seventh or eighth inning for at least a few years now. Instinctively people hear this type of late cycle commentary and assume that end of the good times (i.e., continued economic growth and positive stock market returns) is imminently near and that it probably makes sense to either avoid stocks altogether, or at a minimum, reduce exposure to them. There are two points we’d like to make on this front.

First, it’s important to recognize that it’s never entirely clear where exactly we currently stand in an economic or market cycle. We think that reasonable minds can disagree. This is ultimately because economic and market cycles—unlike baseball games—are not proscribed to set schedules. For instance, according to NBER data, in the post-war era since 1945, while the average expansion has lasted just less than five years (58.4 months), we’ve witnessed expansions lasting two years or less twice (1958-1960 and 1980-1981) and expansions lasting eight years or more on three separate occasions (1961-1969, 1991-2001, 2009-ongoiong). Clearly economic expansions do not follow set time schedules. Economic expansions are similarly not constrained by a minimum nor maximum amount of cumulative growth to be registered. Exhibit 1 nearby clearly displays the amount of variance in both duration and magnitude of growth of economic expansions. The data for stock market cycles (note presented) displays a similarly large variance in terms of both length and magnitude of returns. 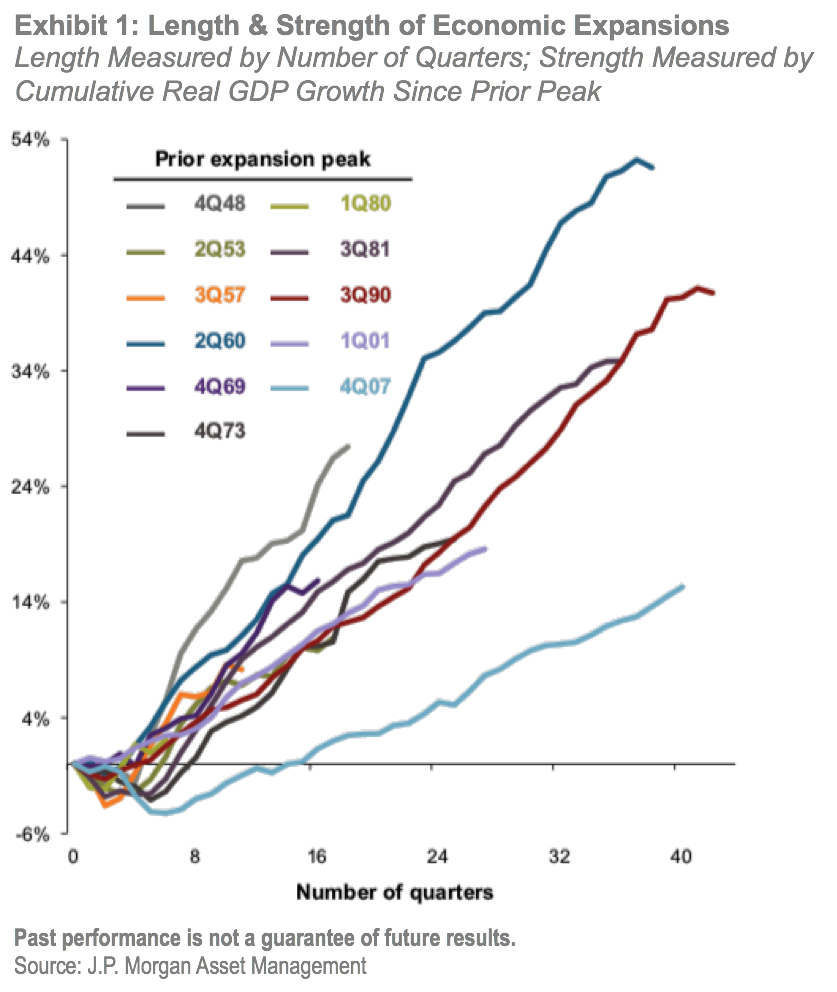 Instead of simply counting months or measuring cumulative growth to gain a sense as to where we stand in the cycle, economists and professional investors often look to a selection of economic and market indicators for guidance. On this front, unfortunately, the picture is still not entirely clear. Many indicators that have historically been present in late cycle environments are noticeably absent currently. For example, we’ve yet to see significant wage gains and inflation pressures, we further have yet to experience sustained above-trend GDP growth nor has the investing climate been marked with an unmistakable sense of euphoria and/or greed that is so often present during the later stages of a bull market run. On the other hand, other indicators or signs of a late cycle environment are clearly present: high equity valuations, tight credit spreads, tightening monetary policy, a flattening but not yet flat yield curve and historically high mergers and acquisitions (M&A) activity to name a few.

The second point we wish to highlight to readers is that even if one does believe we are late cycle currently, it does not immediately follow that the appropriate course of action is to dramatically reduce equity market exposure. A chart from JPMorgan presented nearby in Exhibit 2 clearly demonstrates that reducing market risk too early in a late cycle environment could result in missed opportunities. The chart clearly shows that late-cycle returns have historically been quite significant. Specifically, the chart plots the returns of the S&P 500 Index over multiple periods leading up to the last eight market peaks. We can see that in the two years immediately preceding the peaks, the S&P 500 has gained on average nearly 45%. Even over the half-year period leading up the peak, the market has gained nearly 15% on average. These results suggest that existing or reducing exposure to the market too early may result in missing out on considerable upside. 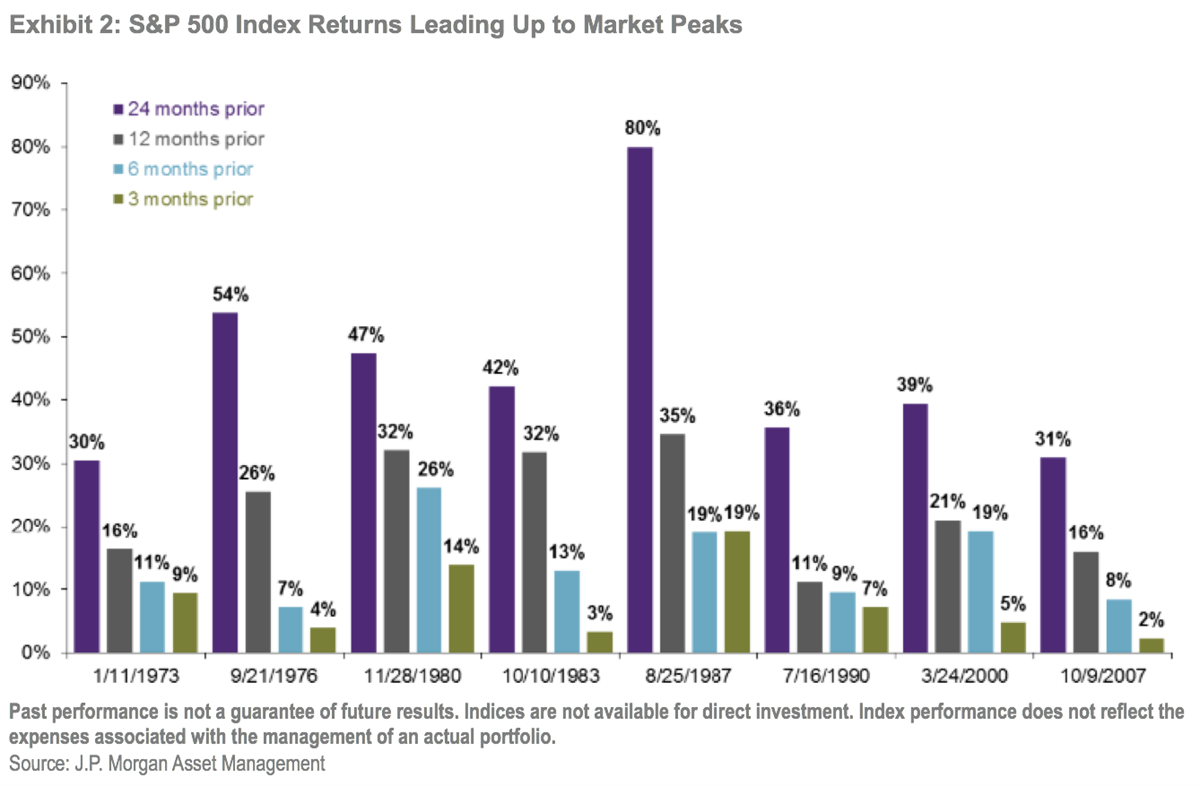 Past performance is no guarantee of future results. Indices are not available for direct investment. Their performance does not reflect the expenses associated with the management of an actual portfolio. All performance referenced is historical and is no guarantee of future results. No strategy assures success or protects against loss. The opinions voiced in this material are for general information only and are not intended to provide or be construed as providing specific investment advice or recommendations for any individual security. To determine which investment(s) may be appropriate for you, consult your financial advisor prior to investing. The economic forecasts set forth in this material may not develop as predicted and there can be no guarantee that strategies promoted will be successful. Stock investing involves risk including loss of principal. S&P 500 Index is a capitalization weighted index of 500 stocks designed to measure performance of the broad domestic economy through changes in the aggregate market value of 500 stocks representing all major industries. Securities offered through LPL Financial, Member FINRA/SIPC. Investment advice offered through Private Advisor Group, a Registered Investment Advisor. Private Advisor Group and Kathmere Capital Management are separate entities from LPL Financial.