Brexit: Today's Implications and Road Ahead

In a widely anticipated referendum held in the United Kingdom on June 23, the majority of voters voted for the U.K. to leave the European Union. The result surprised most market participants and sent major global stock markets lower which erased the gains earned over the preceding two weeks as it was increasingly assumed the vote would result in a decision to stay.

Forecasts regarding the global economic implications of the Brexit vary; however, the majority of economists predict that the most likely outcome will be a modest slowing of growth in the U.K. in the years ahead as the U.K. is hindered by reduced access to the European single market for goods and labor, prolonged uncertainty, and reduced investment from overseas. Economists further predict that the slowing of growth in the U.K., in addition to the general tightening of financial conditions and lower business confidence will also be a slight drag on economic growth across Europe and the rest of the global economy, including the U.S. The effect is predicted to be modest due to the U.K. economy’s relative size in the global economy as it comprises less than 4% of global GDP.

The biggest fears regarding the global implications of the Brexit are, in our opinion, speculative. We have already seen many market participants posit a domino-effect of similar referenda occurring elsewhere in the U.K. (e.g., Scotland and Northern Ireland voting to leave the U.K.) and in the EU (e.g., Spain, France, Italy, Netherlands). The fear is that such referenda could ultimately lead to the disintegration of the U.K. or the European Monetary Union which would have a much larger negative impact on the global economy. We acknowledge that that is a legitimate risk to be considered by investors. However, it remains a low probability outcome in our perspective at this point given that each of these events on their own, while related, are unique and subject to their own set of idiosyncratic circumstances.

Rather than endlessly speculating (and trading) on outlier risk events that may happen in the future, we’d believe a far more effective strategy is to continue to focus on controlling what is in our (and our client’s) power to control as we don’t believe anyone can reliably divine the future direction of the markets. Specifically, we will continue to work with our clients on the following:

To further illustrate the last point, see the chart below from Dimensional Fund Advisors which displays the returns realized by a relatively plain-vanilla balanced portfolio in the years following the onset of a selection of notable recent market crises. 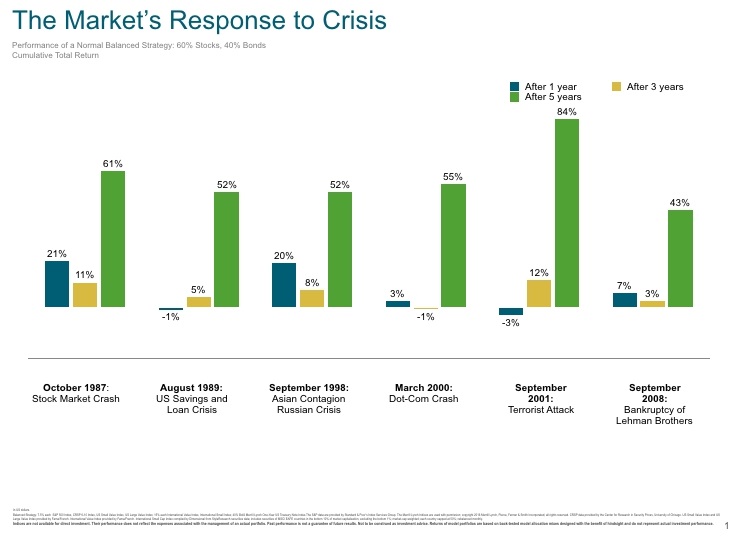 In particular, note the cumulative returns earned by each of the portfolios over the five-year period following the beginning of the crisis (green bars). As you can see, the range of cumulative returns was +43% to +84% across the six historical scenarios. It’s critical to note that these returns would only have been realized by a disciplined investor who remained committed to their portfolio through the depths of the crisis. Meanwhile, an investor who panicked and sold surely would have experienced a permanent loss of capital due by perversely buying high and selling low.

While we don’t know what the current events will ultimately transpire into, we do know that market history suggests that investors will be well served practicing patience and discipline. As the British philosophy Alan Watts once remarked, “muddy water is best cleared by leaving it alone.” The corollary in investing is that oftentimes the best course of action is to remain patient and allow an uncertain situation to run its course.

Nevertheless, if you’d like to talk more about the implications of the Brexit on your individual circumstances and portfolio, give us a call or send us a note. We’d love to hear from you.