Forecasting interest rates is an investment pastime nearly as ubiquitous and popular as trying to guess “what’s next” for stocks. In contrast to what we with market pundits and their stock market outlooks, when it comes to interest rate forecasting there’s generally been a noticeable lack of disagreement among the majority of commentators on which direction they’ve expected interest rates to move in recent years.

For years now, the conventional wisdom has been that rates will move higher, potentially dramatically so. Generally, these forecasts have been accompanied by an investment recommendation to shorten bond portfolio duration or, more dramatically, to get out of bonds entirely. The logic of such an argument is quite simple and is driven by the relationship between bond prices and interest rates: bond prices are inversely related to changes in interest rates. As such, when interest rates move up, bond prices go down. Duration is a common measure of a bond’s or a portfolio of bonds’ sensitivity to changes in interest rates—the longer the duration, the more sensitive the bond’s price is to changes in rates (i.e., longer duration bonds’ prices decline more than shorter duration bonds when rates go up). Accordingly, if one correctly forecasts that interest rates will increase, it follows that bond prices will go down and that the best way to limit any negative portfolio implications would be to minimize portfolio duration or not hold bonds at all.

At the beginning of 2017, the consensus forecast was yet again for interest rates to rise. The prevailing argument was thanks to a boost from fiscal stimulus (e.g., tax cuts, infrastructure spending, etc.) and a new presidential administration that was generally viewed to be more “business friendly,” economic growth was primed to increase and that as a result the Federal Reserve would pick up the pace on its still at the time nascent process of making monetary policy slightly less expansionary by increasing interest rates.

And yet, something quite surprising happened: long-term bonds outperformed short-term bonds during the year—and by a noticeable margin. The chart below details the performance of common indexes designed to measure the performance of short, intermediate, and long-term U.S. Treasury Bonds. As you can see, short-term bonds returned 0.7% trailing both intermediate- and long-term bonds which returned 1.1% and 8.5%, respectively. The broad U.S. bond market, as measured by the Bloomberg Barclays U.S. Aggregate Bond Index, meantime returned 3.5% for the year. 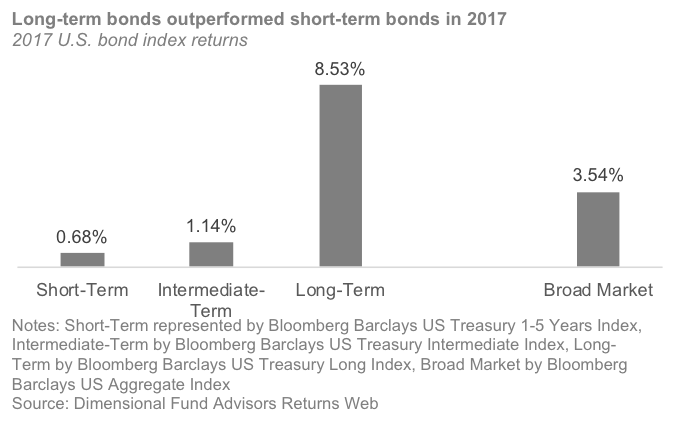 Last year thus provides a simple and clear illustration that even if an investor were to have correctly predicted the path of monetary policy and short-term rates in the economy, this information alone would not have been sufficient for divining the returns of the broad bond market and its various subsectors, nor would it have been sufficient for correctly determining constructive portfolio reallocation decisions.

The Drivers of Bond Returns

This seemingly puzzling conclusion is the direct result of two related realities. The first of which is the fact that bond returns are driven by more than just changes in interest rates. While much of the discussion about bond returns emphasizes (correctly) the inverse relationship between yields and prices, such a narrow focus unfortunately ignores the second component of bond returns: the starting or initial yield.

Bond returns are ultimately a function of both the staring yield of the bond and the subsequent price appreciation or depreciation on the bond over the observation horizon (which is, as we know, driven by changes in yields). In practice, a bond’s or a portfolio of bonds’ starting yield may more than offset the negative effect of price depreciation during in a rising rate environment. We saw this effect at work in 2017 as short-term bonds still managed to deliver positive returns for the year even as short-term rates noticeably increased.

The second point worth stressing is that yield changes can be and often are different for bonds of different maturities. We also saw this occur in 2017 as rates of U.S. Treasury bonds of various maturities changed not only by different amounts during the year but also in some cases in different directions (see graph below)! 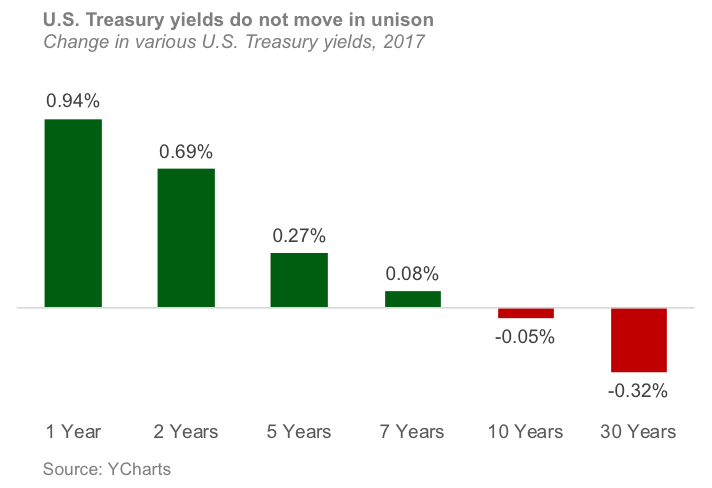 The notable outperformance of long-term bonds relative to short-term bonds in 2017 was thus due to a combination of both of these factors. In addition to sporting a higher starting yield at the beginning of the year, long-term bond rates actually declined through the course of the year while shorter-term rates increased in line with the Fed’s monetary policy actions.

Ultimately, we believe that while attempting to correctly predict the future course of monetary policy and short-term interest rates is a futile exercise in and of itself, we also believe that correctly using such a forecast to drive advantageous portfolio reallocation decisions is an even more challenging and futile exercise.

Investors would also be well served to remember 2017 as a vivid illustration that bonds of varying maturities—short- and long-term—can deliver positive returns in an environment of tightening monetary policy and rising short-term government interest rates.

Thank you for your time and we hope you found this both informative and interesting. Please reach out to us with any questions or comments, we'd love to talk,