In honor of the current bull market turning 10 recently, I thought it would be interesting to take a trip down memory lane back the bull run’s start.

On Monday, March 9, 2009, the day on which the widely followed Dow Joes Industrial Average and S&P 500 Index both closed at their respective lowest levels of the Global Financial Crisis—and the inception date for the current bull run—CNN’s daily market report ran with the somber, almost defeated-sounding headline “For Dow, another 12-year low.”[1] The article carried an equally depressing subtitle, “S&P also finishes at lowest level in more than a decade as Wall Street resumes its retreat on economic worries.”

The article went on to report that on the day, the Dow declined 1.2% to close at its lowest point since April 15, 1997 while the S&P closed 1% lower registering its lowest daily close since September 12, 1996. At the time, both markets were down more than 25% to start the year. The article further noted that since closing at all-time highs 17 months earlier on October 9, 2007, the Dow had lost 54% while the S&P had lost 57%. Not great.

Three days earlier, on Friday March 6, the government released its latest report on the health of the labor market and it was ugly.[2] In the report, the government revealed that employers shed 651,000 jobs from their payrolls in February bringing cumulative job losses to 4.4 million since the start of the recession that began just over a year earlier in December 2007, with 2.6 million of those losses occurring within the past four months. The government further noted that at the time more than 12.5 million people were unemployed and that the unemployment rate stood at 8.1% which CNN separately commented was the highest in 25 years.[3]

Of course, with the benefit of hindsight today, we all know what happened next. 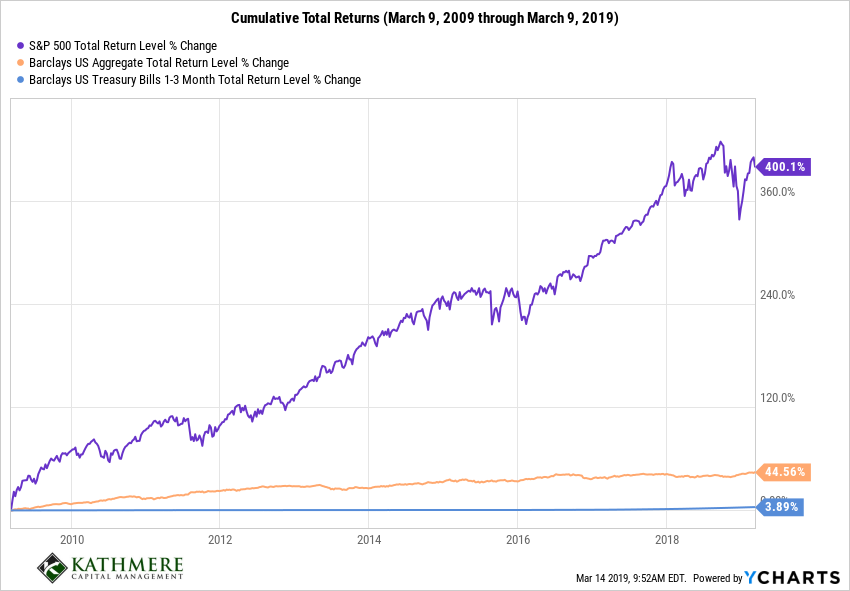 According to data from Ycharts, on Tuesday, March 10, without any readily apparent significant catalyst, the S&P would jump more than 6% which ultimately proved to be the starting point for a sharp rally that would lead to the S&P ultimately finishing the year up more than 26% (and more than 67% from the March 9 low). Ten years later, as of March 9, 2019, on a total return basis, including the reinvestment of dividends, the S&P 500 Index is up more than 400% since its nadir. During this same period, bonds, as measured by the Bloomberg Barclays US Aggregate Bond Index are up slightly more than 40% cumulatively, while cash, as measured by the Bloomberg Barclays US Treasury Bills 1-3 Month Index is up just less than 4%.

There are a few crucial lessons that can be gleaned from this brief retrospective:

Past performance is no guarantee of future results. Indices are not available for direct investment. Their performance does not reflect the expenses associated with the management of an actual portfolio. No strategy assures success or protects against loss. The opinions voiced in this material are for general information only and are not intended to provide or be construed as providing specific investment advice or recommendations for any individual security. To determine which investment(s) may be appropriate for you, consult your financial advisor prior to investing. All investing involves risk including loss of principal. Investing in stock includes numerous specific risks including: the fluctuation of dividend, loss of principal, and potential liquidity of the investment in a falling market.

Standard & Poor’s 500 Index is a capitalization-weighted index of 500 stocks designed to measure performance of the broad domestic economy through changes in the aggregate market value of 500 stocks representing all major industries. The Dow Jones Industrial Average is a price-weighted average of 30 significant stocks traded on the New York Stock Exchange and the Nasdaq.